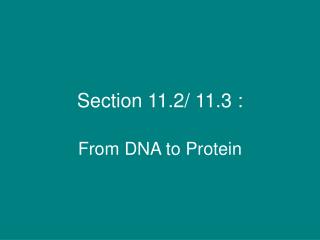 Section 11.2/ 11.3 :. From DNA to Protein. *The sequence of the nucleotides in DNA can be converted to an amino acid sequence in proteins. I. Genes & Proteins 1. Genes are the sequence of Nucleotide bases ex) A-C-T-A-G-T, etc. Splash Screen - . chapter introduction section 1 the first amendment section 2 other guarantees in the bill of rights