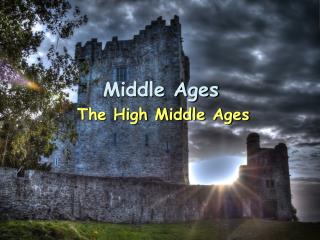 Middle Ages. The High Middle Ages. 1/30 Focus : The Crusades, a series of attempts to gain control of the holy lands, had profound economic, political, and social impacts on Europe and the Muslim world Do Now : What is the significance of the Magna Carta?. Power of the Popes. Middle Ages - . by: trey mcculland. major beliefs. christianity had been the official imperial religion of the roman

Middle Ages!!! - . people. most people in the middle ages were peasants. they worked for their lords in exchange for

Middle Ages - . ch 13-14. section 1. break up of western roman empire. for hundreds of years, europe is in shambles.

Middle Ages - . middle ages. byzantine. thick small basilica or round format. round no outside inside. hagia sophia.