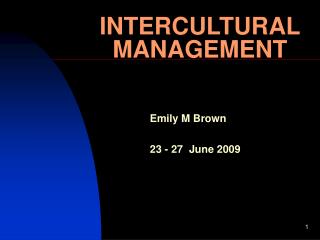 Chapter 5 Culture Shock in Intercultural Communication - . 1. to identify the 5 stages of culture shock 2. to identify

Earnings Management - . what is earnings management? it is the choice by a manager of accounting policies or real actions

PRINCIPLES AND PRACTICES OF MANAGEMENT - . nature of management what is management: # management is vast and extensive #

Project Risk Management - . learning objectives. understand what risk is and the importance of good project risk