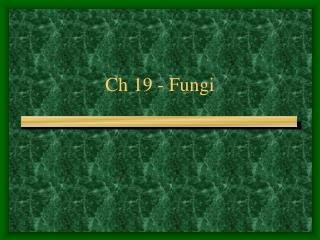 Ch 19 - Fungi. Fungi. Eukaryotic heterotrophs Most saprotrophs, some parasitic. Important Decomposers. All release digestive enzymes onto the dead or dying organic matter, then absorb the nutrients through their hyphae –called external digestion This speeds up the recycling of nutrients. Ch 19 - Blood vessels. ch 19. blood vessels. blood is carried in a closed system of vessels that begins and ends at the

Ch 21 Protists and Fungi - Both bacteria and fungi are decomposers. what characteristics do these two groups share that

Ch.19 - . from stalemate to crisis . gilded age . coined by mark twain- superficial glitter of all the new wealth.

Ch. 19 - . populations. recall: a population is…. a group of organisms of the same species living in the same area at

Ch.19 REVIEW - . - how did members of the grange attempt to solve their problems?. page 577 . describe the populist

Ch. 19-1 - . saving and investment planning. saving- storage of money for future use. financial experts recommend that

Marketing Ch 19 - . what is promotion?. the role of promotion. promotion – any form of communication a business or

Ch.19 REVIEW - . “land for the landless!” “homes for the homeless!” what was this about? who was advertising

Ch. 19 Outline - . take notes on the following:. hitler’s rise to power. world war i depression in europe harms the