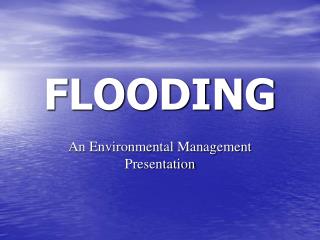 FLOODING. An Environmental Management Presentation. What is a flood?. A flood is an overflow of an expanse of water that submerges land. The EU Floods directive defines a flood as a temporary covering by water of land not normally covered by water. What causes flooding?. Flooding - . causes of flooding. too much rain: lots of rain over short period (flash floods) continued rain over long

Flooding - . new orleans, aug. 2005. flooding. varies with intensity and amount of rainfall perhaps the most

Flooding - . it looks peaceful but the force of rushing water can carry away cars (with people in them). floods like the

Flooding - . this is a short module outlining some flooding impacts. flooding damages to. personal property damage to

Flooding - . john backley,occ and the environment agency. 2015 floods introduction:. the role of the vale council and

Flooding - . causes &amp; effects. in england, the most common forms of floods are : • river flooding that occurs

flooding - . the vanport flood by : chloe thornes and leslie melchor. what is a flood?. a flood is a natural

Louisiana flooding - . by: briley dotson. geography. location louisiana is in the south of the u.s. louisiana has marshes

Texas flooding - Major rainfall over the past few days has caused severe flooding and property damage in parts of texas.

Coastal Flooding - Prediction and prevention of the effects of coastal flooding by forecasting, building, design,