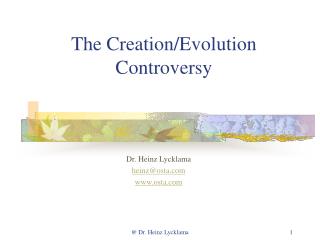 The Creation/Evolution Controversy. Dr. Heinz Lycklama heinz@osta.com www.osta.com. Overview. Science and the Bible Assumptions and the Search for Truth The Bible and Creation Darwin’s Theory of Evolution Operational Science and Origins Science Models for Creation and Evolution Official and personal use of the flag has continued with controversy, as it is an emotional topic - Struggle between

Part I - . chapter 1 the principle of creation. the dual characteristics of god and the creation. section 1. artist’s

Evidence for evolution - . in the early 1800’s prevailing belief was that: organisms were specially created and

Chapter 23 The Evolution of Populations - . question?. is the unit of evolution the individual or the population ? answer