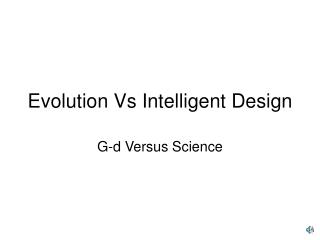 Evolution Vs Intelligent Design. G-d Versus Science. What Evolution is. The claim that all living creatures must have a living parent. Some living creatures are very different from some others. Simple animals and plants existed on earth long before more complex ones. .

Evolution or Intelligent Design? - . an objective view of software development. stephen jenkins. in the beginning

Evolution v. Intelligent Design - . do we teach the controversy?. michael j. bruno january 12, 2005. the origin of

Evolution or Intelligent Design? - . an objective view of software development. stephen jenkins. in the beginning ….

Intelligent Design vs. Accidental Origin - . the origin of information and the genetic code in dna by timothy d. boyle.

Intelligent Design - . would it not be strange if a universe without purpose accidentally created humans who are so

Genetic Evolution vs. Cultural Evolution - . christopher lynch. introduction. since the time of civilization, amongst

Evolution vs. Theory of Evolution - . evolution – change over time theory – origins of organisms. plato (427-347 bc).