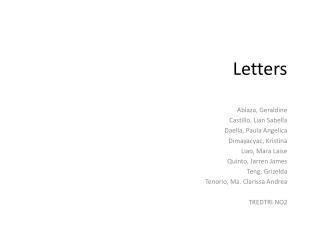 Letters - . letter:. it is the written form of communication in which we can convey our message. . the essential parts of

Letters - . word #2. the primary method of written communication before email was letter writing even through email has

Letters - . understanding the different purposes and styles of letter found in newspapers and magazines t12, t17 –