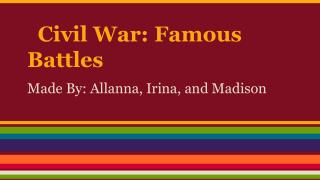 Major Battles of the Civil War - . by: danielle bradley.

The American Civil War: Its Causes, Battles, and Reconstruction - . gps ss8h6. the student will analyze the impact of the

Civil War Battles Part Two of Three - . standard 4.3 e.q. how did these battles give both sides an advantage on the

Civil War Battles Part Three of Three - . standard 4.3 what would be the final conflict for the civil war? . battle of

The Major Battles of the Civil War - . vs. battle of fort sumter. fort sumter - april 12 1861. located near charleston,

The Battles of the American Revolution - . from lexington to yorktown. lexington, massachusetts. the first part of the