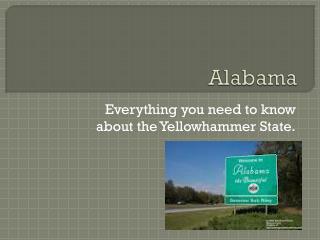 Alabama. Everything you need to know about the Yellowhammer State. State Standards covered……. • 3.01 Understand how to use maps, globes, and other geographic representations, tools , and technologies to acquire, process and report information from a spatial perspective. Alabama - L. alabama. next, you will change your

Alabama - , alabama, we will aye be true to thee, from thy southern shores where groweth , by the sea thy orange tree. to

Alabama - U.s. states abbreviations directions: type the state abbreviation in the box on each slide. www.eslamerica.us

Alabama - . &quot;tribal town&quot; in creek indian (7) other sources claim it is derived from the choctaw indian