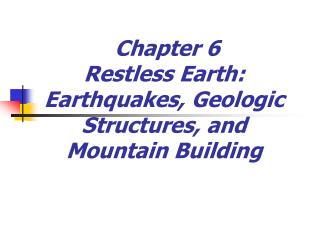 Chapter 6 Restless Earth: Earthquakes, Geologic Structures, and Mountain Building. What Is an Earthquake?. An earthquake is the vibration of Earth produced by the rapid release of energy Energy released radiates in all directions from its source, ( focus ) Energy is in the form of waves Chapter 6 Restless Earth: Earthquakes, Geologic Structures, and Mountain Building - . what is an earthquake?. an

Restless Earth and Varves - . layers and layers…. other planets?. moon, mars, venus all too small and cooled off too

GEOLOGIC STRUCTURES - . geologic structures. characteristics formed in rocks caused by the disturbance from internal or

Geologic Structures - . structural geology – study of deformation of rocks and the forces that cause deformation.

The Restless Earth - . inside earth. your task…. you will design a diagram of earth’s interior to scale you will

Earthquakes Chapter 6 - . elastic rebound theory. rocks on either side of a fault move slowly when locked, stress

Ground Deformation: Faulting and Folding Earthquakes and Mountain- Building - . this is referred to as stress.