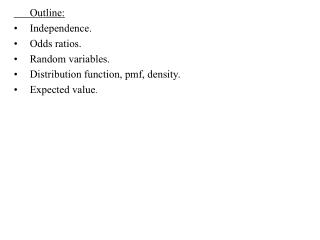 Expected Value- Random variables - . def. a random variable , x , is a numerical measure of the outcomes of an

Odds and Odds Ratios - . by lawrence axten (here in spirit!). odds. the odds of something happening can be referred to as

Expected values of discrete Random Variables - . definition of discrete rv (review). the function that maps s into s x in

Aim: How are odds at odds with probability and expected value? - . do now:. smiles toothpaste is giving away $10,000. all

Random Variables - . an important concept in probability. a random variable , x, is a numerical quantity whose value is