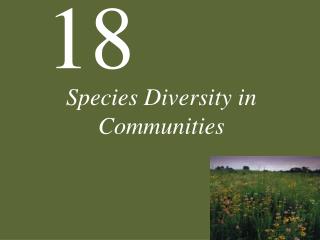 Unity in Diversity - . srila prabhupada wanted the leaders to discuss how to apply unity in diversity. srila

The Origin of Species - . chapter 24 campbell and reece. speciation. process by which one species splits into 2 or more

Invasive Species - . outline. what are invasive species? how are they spread? are they all bad? how does a species become

Chapter 10 BIODIVERSITY - . what is biodiversity?. bio = diversity = v a r i e t y biodiversity is short for…

Workshop on Faculty Recruitment for Diversity and Excellence - . advance program at the university of michigan strategies