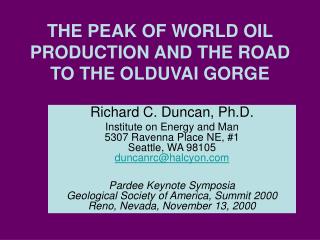 PEAK OIL AND THE FATE OF HUMANITY Chapter 2 –The Important Question: When Will Oil Production Peak? Robert Bériault

Peak Oil The Forward End of the Curve - . presentation to the city of madison april 10, 2006 by mark daugherty focus on

Peak Oil - the emerging reality - Who am i? chris skrebowski has spent half his working life in the oil industry and the

PEAKING OF WORLD OIL PRODUCTION: IMPACTS AND THE SCOPE OF THE MITIGATION PROBLEM - . presented at the southern

PEAKING OF WORLD OIL PRODUCTION: IMPACTS AND THE SCOPE OF THE MITIGATION PROBLEM - . presented at the “beyond oil: