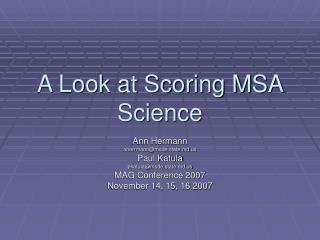 A Look At - Let’s screen out the. cyberbullying. a look at. let’s think about some things you can do on the

A Look At - . tidal wetlands. marsh profile. let’s take a walk into a local salt marsh. we’ll enter by water and walk

Science Instructional Strategies: A Look at the OGT - . so your students are not where they are supposed to be. geologic

Science Instructional Strategies: A Look at the OGT - . what do wrong answers tell us?. formative assessment strategies.

Scoring Teeball at - . role of the scorer. the scorer plays an important role in any game. scorers provide an invaluable

A Closer Look at - . economics mr. joshi. questions for the google powerpoint (please copy). 1 – how did google get

A Look at ESL - . history of the english language current users of english what is “english as a second language?”

A Look At Ultherapy - If age is catching up with you really fast, your skin has probably started sagging around certain

A Look at Renewal - . understanding the renewal process. goals are to leave this presentation understanding: the details

A look at Rhinoplasty - Rhinoplasty is commonly referred to as a "nose job“. it is one ofthe most popular forms of

A Look at ISLAM - . an overview of what muslims believe &amp; practice. islam … second in a series. last lesson,

A Look at Segregation - . note from the chief inspector: . i n order to better read and understand the plot of roll of

A Look at TEAMS - . presented by the division of human resources. today’s session. designed for usps employees who are