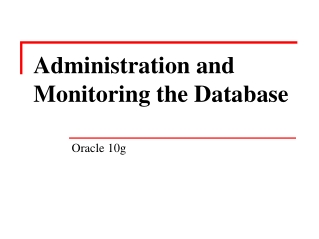 access: creating and using a database - What is microsoft office access 2007?. is a database management system.the term

Creating a Database - . objectives. after completing this lesson, you should be able to do the following: understand the

Creating a New Database - The sister cities database development project. creating a new database. if you came to this

Creating A Database - . mr conti year 10 – computing lesson 5. learning objectives. by the end of this lesson we will

CREATING DATABASE - . presenter: jolanta soltis. when to use excel. use excel when

Installing Oracle Database 10 g - . objectives. after completing this lesson, you should be able to do the following:

Creating A Database - . now that we have examined a variety of data structures in cl, let’s use what we’ve learned to

Creating an Oracle Database - . considerations before creating a db. planning for database creation select the standard