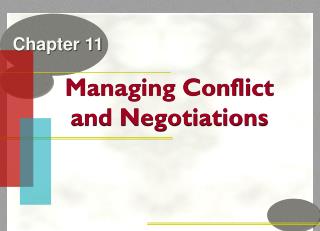 Chapter 11. Managing Conflict and Negotiations. A Contemporary Perspective on Conflict. Conflict is Inevitable , but is Neither inherently Good nor Bad. The Critical Issue with conflict is how it is Managed .

Automated negotiations: Agents interacting with other automated agents and with humans - . sarit kraus department of

Conflict Management - . arguing -- is usually a battlefield for a bigger issue. what is conflict?. a battle, contest or

10 PRINCIPLES IN COMMUNICATION THEORY - . from em griffin, 7h ed. 1. motivation. communication is motivated by our basic

Managing “Difficult” Interactions - . rise about the conflict: options for dealing with difficult

An Evolving Model for Conflict Transformation and Peacebuilding in Aceh - . assessing post-helsinki peacebuilding