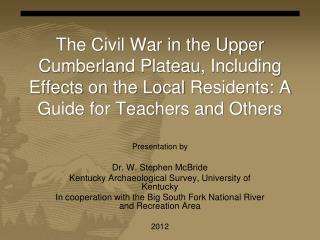 The Civil War in the Upper Cumberland Plateau , I ncluding Effects on the Local R esidents : A Guide for Teachers and Others. Presentation by Dr. W. Stephen McBride Kentucky Archaeological Survey, University of Kentucky University of Kentucky - . the african american presence from 1949 to the present. a student holds a pamphlet by alvin

University of Kentucky Basketball - . the beginning. the program started in 1910 when e.r. sweetland signed on as uk’s