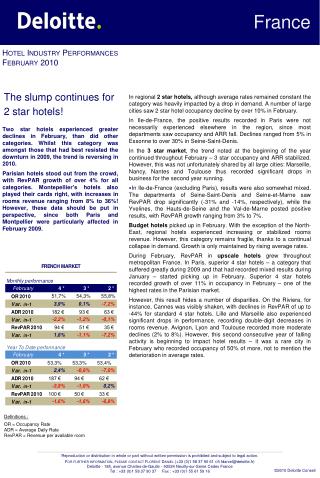 France. In regional 2 star hotels, although average rates remained constant the category was heavily impacted by a drop in demand. A number of large cities saw 2 star hotel occupancy decline by over 10% in February. France - Is the second largest country in europe and has the population of 57.5 million and covers an area of 212,935

France - . review : all about me &amp; colors. la nourriture is food. food is very important in france as it forms

France - . mrs. rosario french. where is france located ?. france is located in western europe. it shares borders with

France - . by sadie gerber. languages. the main language is french. the other languages are alsatian, breton and basque.