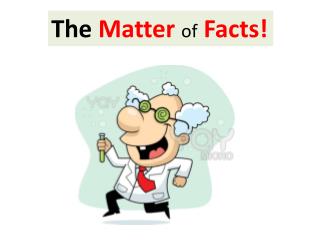 The Matter of Facts!. Matter Anything that has mass and takes up space. Everything around us is matter! So what’s the matter? It’s a matter of fact(s)!. Identifying Matter . What’s the matter?. Physical Properties of Matter. 4 Facts about Translation That Every Translator Will Love - No matter, you are a team of hindi translators or any other

Basic Facts - . basic facts. what are they? why should students memorize basic facts?. why basic facts instruction?.

Chemistry : Chemical Processes - . what is chemistry and matter? chemistry is the study of matter, its properties and its