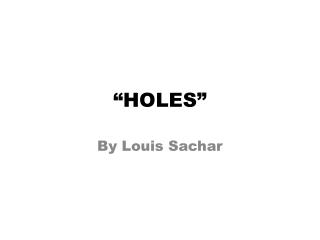 “HOLES”. By Louis Sachar. Main Characters. Stanley Yelnats -called “Caveman” by the other boys/sent to “Camp Green Lake” because he supposedly stole a pair of sneakers/doesn’t have a lot of friends/ a little overweight The Warden -in charge of “Camp Green Lake”/not very nice KERR SUPERSPINARS AS AN ALTERNATIVE TO BLACK HOLES Zdeněk Stuchlík - Institute of physics, faculty of philosophy and

Trusses - . worksheet10. to answer just click on the button or image related to the answer. let's go !!. what is a