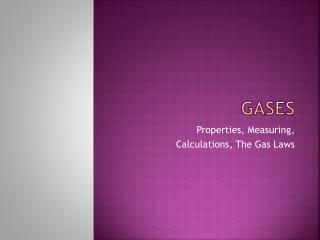 Gases. Properties, Measuring, Calculations, The Gas Laws. Characteristics of Gases. Gases are fluids “Any substance that can flow” Gases have a MUCH lower densities than liquids and solids Enables them to “float” away Gas particles are much farther apart. Review.