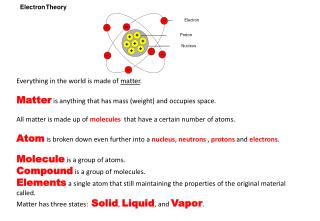 Everything in the world is made of matter . Matter is anything that has mass (weight) and occupies space. All matter is made up of molecules that have a certain number of atoms. Atom is broken down even further into a nucleus , neutrons , protons and electrons . Matter Is Made Up Of Atoms - . chapter 4. structure of the atom. an atom is the smallest particles of matter that retain

Weight is a matter of consuming - More bio x4 than they burn. however, if you feel that you may have a problem that’s

Mass - the amount of matter in an object. - What is mass? is mass different on earth than on the moon? why do you weight

Chapter 2 Matter is Made of Atoms - . 2.2 electrons in atoms. objective. objectives: relate the electron to modern

Matter that is made up of only one kind of atom - All compounds are molecules, but not all molecules are compounds. the

What is the matter? - . where is the antimatter?. professor michael g green royal holloway university of london. what is

What IS Matter ? - Hadrons. baryons. mesons. quarks anti-quarks. what is matter ?. matter is all the “stuff” around

WHAT IS MATTER? - . which is an example of a solid?. table. steam. syrup. apple juice. good job!. try again…. which is

Is It Matter? - . all matter has mass . mass is the amount of matter making up an object. mass is measured in units

What is matter? - . all matter is composed of atoms! just how small are these atoms?. a quick gamble. would i better off

What IS Matter ? - . matter is all the “stuff” around you!. here’s the picture we’re going to uncover (not all

What is Matter ? - . matter is…. everything we see around us: glass metal plastic bones breath.

Matter - . by cam &amp; oshy. compare the weight. when you weigh an object it would weigh the same if it was taken

Is It Matter? - . circle the items that you believe are matter: table air glass sound light sand write your own

Atom—All matter is made of atoms. Smallest part of matter (NOT LIVING) - . element . pure substances that can not be

Measuring Matter - . mfms. mass vs. weight. mass- a measurement of how much matter an object contains weight- a

Measuring Matter - . chapter 2 section 2. weight. weight is a measure of the force of gravity on an object. would your