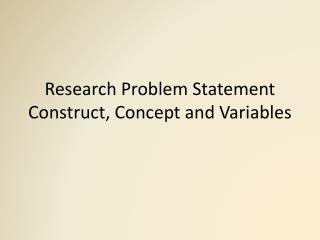 Research Problem Statement Construct, Concept and Variables. Research Process. The research process: Characteristics of research: Proprietary vs. scholarly research Research is based on curiosity and asking questions (creativity) Research is a systematic process Research problem and Problem statement - . sak5090. what is a research

Problem and Variables - . by: camryn parsons. the problem. amy and up to 5 friends want to go to the zoo. if it costs

Problem Statement - . the purpose of this project is to develop a low resistance breath condensate system that can handle

PROBLEM STATEMENT - . most consumers have a negative, anxiety-filled mindset when it comes to car buying. mindset. n. 1.

Problem Statement - . an automobile drive shaft is made of steel. check whether replacing it with a drive shaft made of

Problem Statement - . a drive shaft for a chevy pickup truck is made of steel. check whether replacing it with a drive