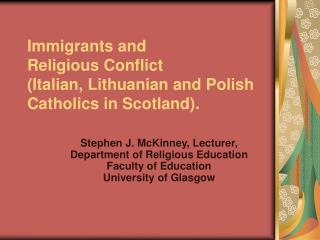 Age of Religious Wars - . because of all the bloody conflict between protestants and catholics france, england, the

Conflict in Northern Ireland - . cy-woods high school world geography. where are we talking about?. protestants

Chapter 15 Religious Reform and State Building in Europe - . catholics, protestants, and orthodox christians in europe by

FROM RELIGIOUS DISPUTE TO RELIGIOUS WAR - . lutherans and catholics made peace in germany in 1555, but the following

The Immigrant Experience of Scotland - . lithuanian immigrants. why did they

Protestant Irish Immigrants - . protestant. people that moved from ireland were not just catholics. significant group of

Immigrants E - . aim. the main aim of our campaign was to give a support to the emigrant association