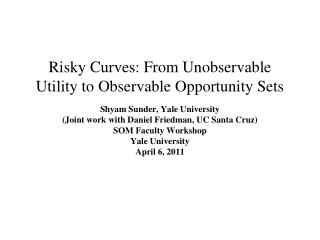 The Observable / Unobservable Distinction - . anti-realism depends crucially on this distinction – the epistemological

Observable activity - . a final demand. a course of action. pestering or troubling repeatedly. an advisor. written or

Observable Properties - . standard k-5 : the student will demonstrate the understanding that objects can be described by

From Choices to Opportunity Costs - . opportunity costs – the most valued alternative you give up to do something what

PROCUREMENT – from Complexities to Opportunity - . jim and margaret cuthbert www.cuthbert1.pwp.blueyonder.co.uk. what

PROCUREMENT – from Complexities to Opportunity - . jim and margaret cuthbert www.jamcuthbert.co.uk. what this talk

Tangents to Curves - . a review of some ideas, relevant to the calculus, from high school plane geometry . straightedge

Elasticity from mathematical demand curves - . before we saw linear and nonlinear demand curves. we return to them to get