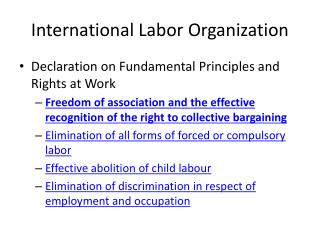 International Labor Organization. Declaration on Fundamental Principles and Rights at Work Freedom of association and the effective recognition of the right to collective bargaining Elimination of all forms of forced or compulsory labor Effective abolition of child labour INTERNATIONAL ORGANIZATION - . unit one. objective. define what international organizations are; analyze the functions of

International Labour Organization - . conditions and needs of social dialogue in transport in eu member states and