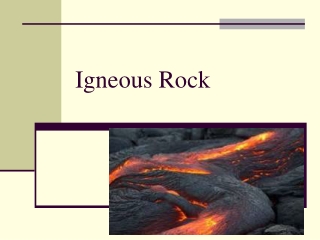 Igneous Rocks - . http://www.soest.hawaii.edu/coasts/lecture/gg101/index.html. what is igneous rock?. earth’s crust is

Rocks - . 6.e.2.1 summarize the structure of the earth, including the layers, the mantle and core based on the relative

Igneous Rocks - . how do igneous rocks form?. from the crystallization of magma. magma can cool in two places. on the

Igneous Rocks - . an igneous rock is formed when magma or lava cools and solidifies as a result of the process of