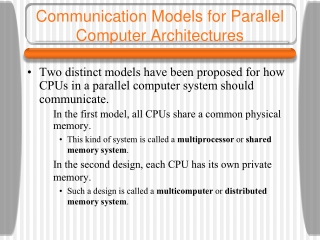 Communication Models for Parallel Computer Architectures. Two distinct models have been proposed for how CPUs in a parallel computer system should communicate. In the first model, all CPUs share a common physical memory. Parallel Computer Architectures Duncan A. Buell - . rules for parallel computing. there are no rules. memory latency is

Modeling and Parallel Simulation of Multicore Architectures with Manifold - . the manifold team. school of electrical and

Parallel Programming Models - . jihad el-sana. these slides are based on the book: introduction to parallel computing,

Parallel Architectures - . overview. this paper is a rehash of a paper that appeared in 1972 “some computer

Chapter 5: Multiprocessors (Thread-Level Parallelism)– Part 2 - . introduction what is a parallel or multiprocessor