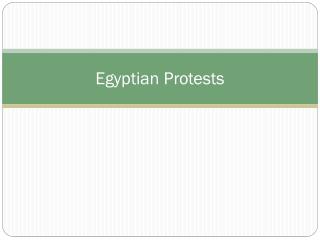 Egyptian Protests. The setting. Egypt is a large, mostly Arab, mostly Muslim country. At around 80 million people, it has the largest population in the Middle East and the third-largest in Africa. It has been ruled by Hosni Mubarak since 1981. Why are Egyptians Unhappy?.