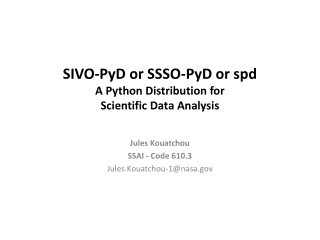 SIVO-PyD or SSSO-PyD or spd A Python Distribution for Scientific Data Analysis. Jules Kouatchou SSAI - Code 610.3 Jules.Kouatchou-1@nasa.gov. Background (1). Python is used in industry and academia for a wide variety of purposes There are more than 15,000 Python related packages Data: A Carrot or a Stick? - . data may be used… to highlight, clarify, and explain what’s happening in your

Summary or Analysis? - . use ads to practice your ability to understand the difference between summary and analysis. .

Scientific Enquiry, Scientific Process or Problem Solving? - . what do you think?. let’s test our knowledge. form

The Scientific Method or Process - . steps to a logical process. hypothesis: educated guess predict outcome if i do….

The Scientific Method (or process) - . today’s agenda: let’s hear your ideas: what did you come up with, and how? how

Scientific Claims or Traditional Beliefs - . an investigation of what constitutes a scientific knowledge claim and