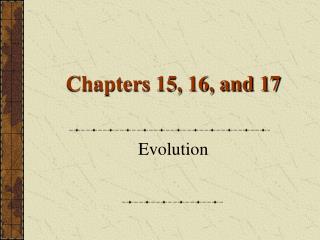 Chapters 15, 16, and 17. Evolution. The Theory of Evolution. Theory – well-tested explanation that unifies a broad range of observations Evolution – change in a kind of organism over time; process by which modern organisms have descended from ancient organisms Can theories change over time? Chapters 15, 16, 17 - . empty slide to keep flashcards in order. what is evolution?. change in organisms over a long

Chapters 16 and 17 - . objectives describe the data that led watson and crick to suggest their model of dna

Chapters 16 and 17 - . susanne and creed. time and place setting. in our chapters it is october 1872 and they are on the

Chapters 16, 17, 18 - . reaction energy and reaction kinetics. thermodynamics : the study of energy change in

Chapters 16 &amp; 17 - . physics 101 combined chapters on electricity and magnetism. introduction to hyperphysics. do

Chapters 14, 15, 16 - . oceanography. oceanography essential questions. 1 . how does topography of the ocean floor