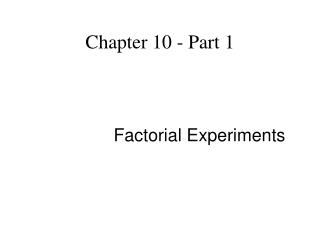 Chapter 10 - Part 1. Factorial Experiments. Nomenclature. We will use the terms Factor and Independent Variable interchangeably. They mean the same thing. Chapter 10 Part 1 - . nonrenewable energy. chapter overview questions. what are the advantages and disadvantages of

Chapter 1- Part 1 - 2. chapter1- part1. introduction and overview of manufacturing. what is manufacturing?materials in

Chapter 10, part A - . sensory physiology. about this chapter. what are the senses how sensory systems work body

Chapter 10, part A - . classification of microorganisms. taxonomy. taxonomy the science of classifying organisms

CHAPTER 10 part 10.4 - . credit rights and responsibilities. truth-in-lending law. must be told cost of credit in writing