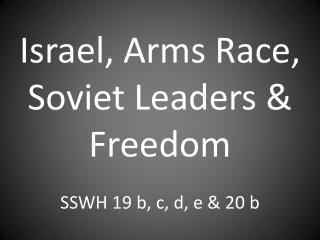 Israel, Arms Race, Soviet Leaders & Freedom SSWH 19 b, c, d, e & 20 b. How did the world change socially, economically, and politically as a result of the Cold War and decolonization?.

Leaders of Israel - . the president of israel is shimon peres the prime minister is binyamin &quot; bibi &quot;

CONTROLLED ASSESSMENT: Cold War Relations 1941-1965 The Start of the Arms Race The BIG Question: - What caused the cold

Arms Race - . airplane. more useful by the end of the war beginning of war: used for spying, gathering information middle

Arms Race - . scenario. in this recreation simulation, you will be playing both the us and the ussr to recreate the

The Cold War Culture in America - . american studies. arms race. the destructiveness of the atomic bomb was well known by

The End of the Cold War - . the 3 main dimensions of the cold war: ideological communism vs. capitalism, revolutionary