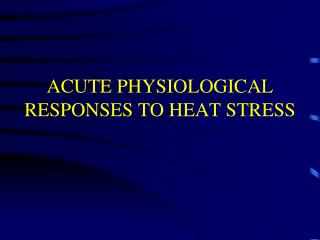 ACUTE PHYSIOLOGICAL RESPONSES TO HEAT STRESS. Basic Mechanisms of Thermoregulation. Core temperature maintained between 35 to 41 o C despite environmental extremes which fluctuate between -88 to 58 o C via: Heat Stress and the Firefighter - . after completing this section, the firefighter will be able to: identify basic heat

Stress and GAS- Hans Selye - . selye (1956)– administered ‘noxious’ agents to rats and he found that they had same

STRESS - . stress (ambiguous term): the event : a threat (real or implied) to homeostasis (often called a stressor) the

Heat Stroke Victim - “if you asked me to name the three scariest threats facing the human race, i would give the same

STRESS - . stress (ambiguous term): the event : a threat (real or implied) to homeostasis (often called a stressor) the

WORK-RELATED HEAT STRESS Mustafa Khogali Dec.2006 - . introduction. is our climatic environment a threat to our

HEAT STRESS PREVENTION EHS Department - . heat stress why a serious health concern. due to the high temperatures and