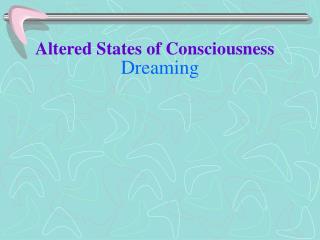 Altered States of Consciousness. Dreaming. What are dreams?. Dreaming permits each and every one of us to be quietly and safely insane every night of our lives. Charles Fisher What are dreams? Electrochemical events that involve the brainstem, areas of the cortex, and the eyes. Dreams. Dreaming - . 1) who dreams and how often do they dream?. e veryone dreams w e dream many times each night and dreams last

Dreaming - . residency september 2005. what you’re missing you already have…. dreams…. you have a dream! you

Pony Dreaming - . by lynette gleeson. twin welsh ponies are belle and patch, they are friendly and strong, shiny and

Aboriginal Dreaming - . australian aborigines. a member of the indigenous peoples of australia (the original inhabitants