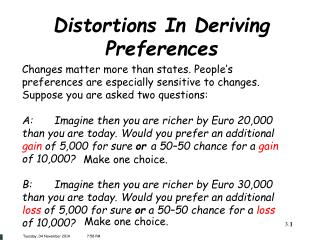 Changes matter more than states. People’s preferences are especially sensitive to changes. Suppose you are asked two questions: A: Imagine then you are richer by Euro 20,000 than you are today. Would you prefer an additional gain of 5,000 for sure or a 50–50 chance for a gain of 10,000? Preferences in ZIMS - . tips and tricks july 2018. there is a television show called “lucifer”. the concept is that t

Preferences - . rationality in economics. behavioral postulate : a decisionmaker always chooses its most preferred

Preferences - 3. preferences. rationality in economics. behavioral postulate : a decisionmaker always chooses its most

Preferences - . the way forward. curriculum policy. barlby high school will provide: an environment and curriculum which

Deriving the rule - The cosine law. the cosine rule generalizes pythagoras’ theorem and takes care of the 3 possible