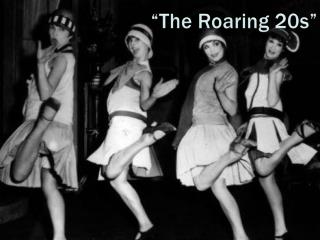 “The Roaring 20s”. New Ideas. After WWI, America would become the world’s leading economic power. But the 1920s would be a time of great change in America. Many people began to question traditional beliefs about the world. New Ideas. Politics of the Roaring 20s - Divisions among americans. wwi ended the progressive erathe influx of immigrants led to

The Roaring 20s - . learning objective and essential question. lo: i can explain the daily life of the post-world war i

The ROARING 20s - . the jazz age. cities and suburbs. due to improved transportation. communication changes marconi

The Roaring ‘20s - . american studies. practice question. this type of speech is intended to ruin someone’s

“The Roaring 20s” - . new ideas. after wwi, america would become the world’s leading economic power. but the 1920s

The Roaring 20s Warm-ups - . 11/27-28 warm up: president calvin coolidge once said “the business of america is america

Roaring ‘20s!!!!! - . the age of normalcy the age of the flapper the jazz age. reasons it happens. end of wwi leads to