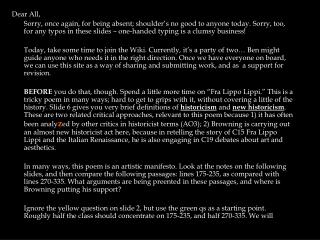 Dear All, Sorry, once again, for being absent; shoulder’s no good to anyone today. Sorry, too, for any typos in these slides – one-handed typing is a clumsy business! Dear All, - Assalamu alaikum. dear all,. i am happy. to. announce u all that…. i am gonna become a full fill man. the

My dear colleagues from all over Europe, dear Lesley, dear Henk, dear Lothar, - My name is theo pagel and i am the

DEAR ALL, WELCOME TO ICHS4! - . with support from natural resources canada. ia hysafe and international collaboration.

Rector of the University Dear colleagues Dear students all of you - . i’m very pleased that the renewal of the erasmus

Dear All May your dreams always be dear, my your moments all be happy… ¡Season’s Greetings! - ¡meilleurs voeux!

DEAR - . do now 11.20.13. think about one place that you have traveled. what did you bring back from this place? this

Dear - Thank you for your kind enquiry. we are pleased to enclose details of our holiday cottages for the 2018

Dear Homeowner: - You may know me from my saturday morning radio show, rosie on the house, which airs from 8a-11a on

DEAR STUDENTS - . welcome to c-6 of bogra zilla school equivalent to p-6 of alford primary. on food for health.