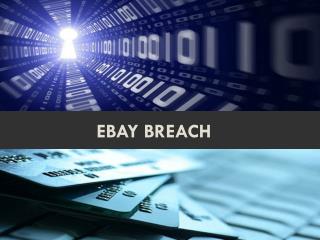 The attack actually took place between the months of February and March. However, the irony is that it was only until the month of May that the eBay staff came to know about such a breach. eBay - . questions. questions. what service does ebay provide? what role do customers have in providing this service? how

Breach Database - Purpose of our session: - present examples of breaches in the educational area - identify the impact of

Using Ebay - . how to buy and sell safely and securely. an online auction site items are bought/sold by/to the highest