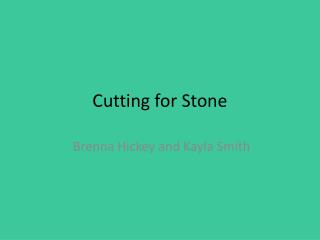 Cutting for Stone. Brenna Hickey and Kayla Smith. Setting. Cutting for Stone. “I will not use the knife, not even on sufferers from stone, but will withdraw in favor of such men as are engaged in this work.” --Hippocratic Oath. Abraham Verghese. Stone cutting machine in uae - With a range of 20 different types of block splitters and cutters, almi has the right tool

Plasma Cutting Machines for Precision Cutting - Depending on your choice and requirement, you can choose the best quality

MPG Stone Most Rightful Place for Natural Stone - Mpg stone, after all, is a doyen when it comes to manufacturing and

Ruby Stone for Sale - We offer precious ruby stone for sale that are known for encouraging delight, carrier building and

grout for tile stone - Grout for

Proper procedure for product cutting - . supplies: cutting board 2 knives: one serrated and one chef’s knife napkins

application for tree cutting permit - Trees enhance the value as well as the beauty of the streets, homes, and