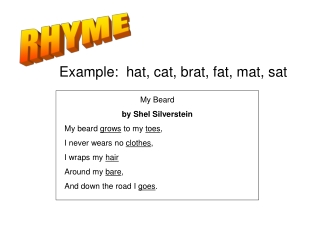 My Beard by Shel Silverstein My beard grows to my toes , I never wears no clothes , I wraps my hair Around my bare , And down the road I goes. RHYME. The repetition of sounds. Example: hat, cat, brat, fat, mat, sat. Here is. RHYTHM. The beat. POETRY - . express yourself!. rhyme scheme. some poems rhyme and some do not! poems that do not have a rhyme scheme are

Poetry: Rhyme, Rhythm, and Meter - . rhyme. the correspondence of sounds internal rhyme: rhyme that occurs within the

ENGLISH CLASS IV A WATERING RHYME - . a watering rhyme. early in the morning, or the evening hour, are the times to

Rhyme and Syllables - . what is the rhyme-scheme?. “hope” is the thing with feathers by emily dickinson hope is the

Rhyme Scheme: the pattern of rhymes used in a poem, usually marked by letters - . why is the rhyme scheme of this poem

RHYME SCHEME - . roses are red, violets are blue, sugar is sweet, and so are you. rhyme scheme in music. my heart is

Rhyme and Repetition - . with the help of shel silverstein. repetition. repetition is when a word or a group of words is

Rhyme Scheme - . mrs. stephanie bloss english 8. what is rhyme scheme?. a regular pattern of rhyming words in a poem;

Rhyme Scheme and You - . a safety guide. rhyme definition. words that sound the same usually at the end of lines of