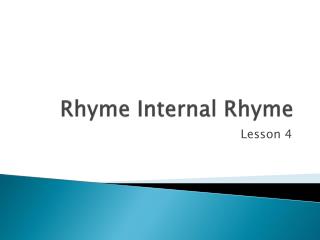 rhyme - Learning intentions to recall and understand how to go about reading a poetry text. to be aware of the range of

RHYME - Bust-a-. rhyme. work with your table to turn the question into a rhyming statement. example:. a comical rabbit?.

RHYME - My beard by shel silverstein my beard grows to my toes , i never wears no clothes , i wraps my hair

Rhyme - . by mikki horton. definition. rhyme: is the repetition of sounds at the ends of words. many traditional poems

Rhyme - . rhyme. the repetition of accented vowel sounds and all sounds following them in words that are close together

RHYME - . words sound alike because they share the same ending vowel and consonant sounds. (a word always rhymes with

Rhyme - . / raɪm /. rhyme. words that sound the same in the end. 句尾單字押韻. listen and write out the rhymes.

rhyme - Success criteria to recognise poetry text and identify the subject, theme, structure and pattern of poems. to

Perfect Rhyme vs. Slant Rhyme - . rhyme. a correspondence between two words that have a similar sound. “two words

Perfect Rhyme vs. Slant Rhyme - . rhyme. a correspondence between two words that have a similar sound. “two words that

Rhyme Scheme - . rhyme scheme. a rhyme scheme is a regular pattern of rhyme, one that is consistent throughout the extent

Rhyme Time - . during music time, children are playing instruments and singing along to a song. the teacher stops the

Rhyme Scheme - . rhyme scheme is the pattern in which the last words in lines of poetry rhyme. we record rhyming lines

67. RHYME - . definition –repetition of accented vowel sounds, and all sounds following them, in words that are close

Rhyme Scheme - . rhyme scheme is the pattern of end rhyme in a poem. how to determine rhyme scheme:. underline the last