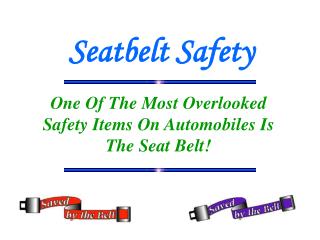 Seatbelt Safety. One Of The Most Overlooked Safety Items On Automobiles Is The Seat Belt!. Safety Belts.

Seatbelt Safety - . one of the most overlooked safety items on automobiles is the seat belt!. safety

Seatbelt Rewebbing - Https://webbingreplacement.com/collections/seat-belt-rewebbing - did you know that you can get a

“Fasten Your Seatbelt” - . part 3 “kingdom business”. one of the things that should distinguish us as believers

Speed Control NJ Seatbelt Laws - . you are driving on a highway where the maximum speed limit is 55 mph. you see warning

Speed Control NJ Seatbelt Laws - . take and complete the handout. name each sign name the colors name the category of

Why you should wear a seatbelt - . by: mike d’alessandro. facts. 1 out of every 5 drivers will be involved in a car

Nevada Car Accident Deaths & Serious Injuries to Those Without A Seatbelt - Under nevada law, all motor vehicles