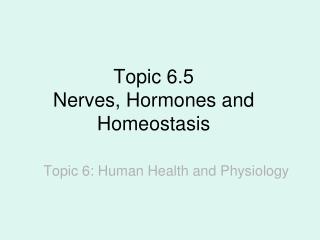 Topic 6.5 Nerves, Hormones and Homeostasis. Topic 6: Human Health and Physiology. Responding to the environment. Our nervous system helps us interact with our environment. It provides responses to stimuli affecting our senses. The nervous system can be split into: A2 BIOLOGY Homeostasis Assignment - . by samir babaldin. homeostasis. homeostasis, from the greek words for

Spinal Nerves - . lecture 4. location and structure. there are 31 pairs of spinal nerves, each pair numbered according to

The Endocrine System: - . t he human body system that is responsible for our raging teenage hormones and homeostasis.

6.5 Nerves, Hormones and Homeostasis - . assessment statements. 6.5.1 state that the nervous system consists of the

Endocrine System Hormones - . regulation. why are hormones needed? chemical messages from one body part to another

Endocrine System - . kara robbins. system of glands, each of which secretes different types of hormones directly into the

Endocrine Systematics - . barrett peters biomedical research. function and format. made up of all glands and hormones of