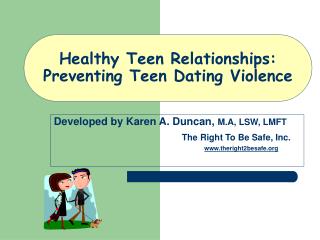 Healthy Teen Relationships: Preventing Teen Dating Violence. Developed by Karen A. Duncan, M.A, LSW, LMFT The Right To Be Safe, Inc. www.theright2besafe.org. Purpose of this program. To highlight for teens what it means to have a healthy relationship during adolescence. INTERNET 101 - Presented by the adult and teen services department of the north canton public library welcome! in this

Nurturing Relationships - . healthy and positive human growth and development depend on nurturing relationships. there

END VIOLENCE TOGETHER For The Dignity Of Every Woman - . insert agency/program name. presentation overview insert length

Ten Things We Should Know About Education for Young Adolescent Learners - . team challenge. characteristics of successful

The Importance of Pop Culture - Fashion. internet websites, blogs, wikis, games. why is it so important? ... icebreaker

END VIOLENCE TOGETHER For The Dignity Of Every Woman - . insert your agency/program name. presentation overview insert