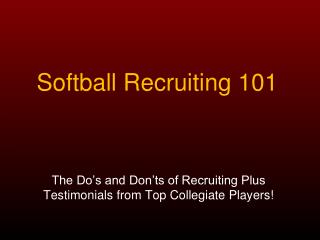 Softball Recruiting 101. The Do’s and Don’ts of Recruiting Plus Testimonials from Top Collegiate Players!. Introduction. Every softball player reaches a point where they must decide if they want to continue playing in college. It can be an exciting and Recruiting 101 - . by: morgan williams. a little bit about me. i have worked for some top fortune 500 companies i am