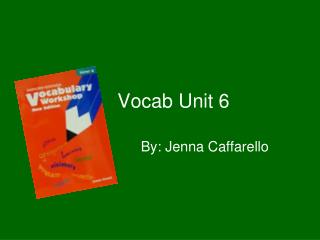 Vocab Unit 6. By: Jenna Caffarello. Abject. (Adj) – Degraded; base, contemptible, cringing, servile; complete and unrelieved. In history class, we are learning about the abject lives of families during the Great Depression. Agnostic. (N) – One who believes that nothing can be Vocab Unit 6 - . accede. (verb) to yield to; to assume an office or dignity. brandish. (verb) to wave or flourish in a

Unit 6 Vocab - . by me and this kid. anomalous (adj). abnormal, irregular, not usual. stressed syllable. a-’nom-a-lous.

Vocab 6 - . 1) anarchy – total absence of government government officials fled the country leaving it in a state of

Vocab #6 - . apprehensive. part of speech: adjective definition: anxious or fearful that something bad or unpleasant will

Vocab Unit 1 - . acquiesce - verb. agree without protesting soldiers are expected to acquiesce to the orders of their

Vocab Unit 8 - . abstract - adj. not concrete; theoretical numbers are abstract, but they can be represented by symbols.