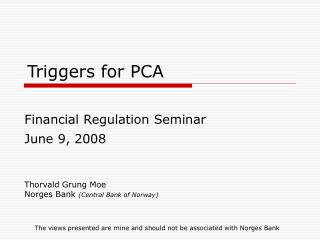 Triggers for PCA. Financial Regulation Seminar June 9, 2008. Thorvald Grung Moe Norges Bank (Central Bank of Norway). The views presented are mine and should not be associated with Norges Bank. Outline. Background Key features of PCA PCA in Europe? Design of PCA triggers PCA - . mechanics. component. the component is a linear combination of the original variables the variance of y 1 is

TRIGGERS - . why triggers are useful. a trigger is a named database object that is associated with a table, and that

Triggers - . a trigger is a statement that is executed automatically by the system as a side effect of a modification to

Triggers - . the different types of integrity constraints discussed so far provide a declarative mechanism to associate

Adaptive Algorithms for PCA - . part – ii. oja’s rule is the basic learning rule for pca and extracts the first

Triggers - . chapter 5. triggers. a trigger is a statement that is executed automatically by the system as a side

Triggers - . lesson 19. skills matrix. triggers. sql code permits you to access only one table for an insert, update, or

Triggers - . bit 275. a quick reference and summary. triggers. sql code permits you to access only one table for an

Triggers - . triggers: motivation. assertions are powerful, but the dbms often can’t tell when they need to be checked.