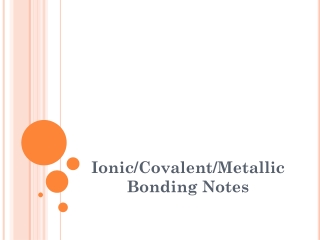 Ionic/Covalent/Metallic Bonding Notes. Stable or Unstable?. An atom is only stable if it has a full valence shell If an atom is stable, it will not bond If an atom is not full, it will bond. Compounds. Compounds are formed when 2 atoms of different elements bond together. Bonding - . chemistry revision. there are two types of bonding you need to be familiar with…. covalent bonding ionic

Empirical Formulas - . the simplest, whole-number ratio of atoms in a molecule is called the empirical formula . can be

Chemical Bonds: - The attractive (intramolecular) forces, ie.“ the glue” , strong enough to maintain a group of

Covalent &amp; Ionic Bonding - . the sharing and transferring of electrons. the difference between ionic &amp;

Aim: How do chemists distinguish between ionic , covalent , and metallic bonding? - . two major categories of compounds

Chemical Bonding - . ionic, covalent, and metallic bonding. what does it mean to “bond”? think about the types of

Chapter 7 Ionic &amp; Metallic Bonding - . anything in black letters = write it in your notes (‘knowts’). chapter